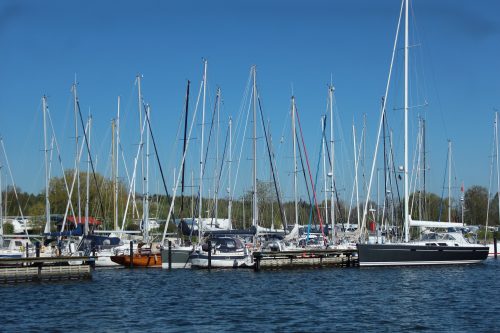 Arnis lies halfway along the Schlei Fjord of northern Germany with quite a few alternatives to tie up.

Arnis’ claim to fame is that it is Germany’s smallest official town. And small it is. Arnis really is just a main street with some houses to the left and right and then the pretty church to the west of the ferry crossing. But it is all very pretty and has a special charm which does make it a popular spot for tourists.
The main marina is around the back of the town and offers a large barbecue area and a playground for the younger ones. It does tend to sand up though, so for all boats with a kiel over 1.80 be wary of getting stuck in the sand, depending on the wind direction and strength. 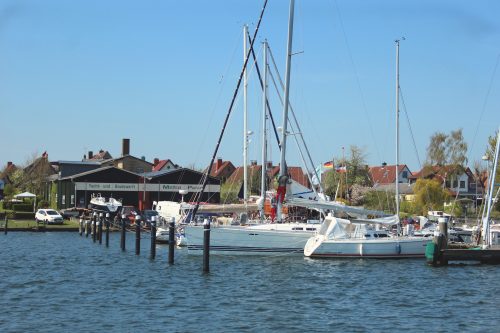 On the southern side of the lagoon you can also stop at the smaller M&P marina This wharf actually makes classic wooden boats as well as managing two smaller marinas, one on the lagoon and one on the Sund side of the town. The M&P jetty on the Sund side are closer to the boating traffic in the main channel, but still very relaxing, especially once the evening comes around. The second commercial jetty is also open to visitors, it belongs to Im Jaich. In both be aware of the strong currents when maneuvering, depending on the wind direction and strength they can cause problems.

There are walking paths around the small Arnis peninsular, continuing west  along the banks past the church. For those looking for a longer walk, follow the path west until it turns right up the hill. At the next crossing turn right, and also another right following and you will arrive back in Arnis, at first at the main marina or if you continue at the path on either side of the peninsular.

Grab a coffee and a comfy seat in the sun at the end of the Im-Jaich jetty at Freies Arnis, a small coffee truck with some really good coffee (and cake)! If you are looking for a snack with a view, stop in at the Strandhalle  along the walking path to the west of the ferry, right near the church. In between is the Schleiperle, which was closed for a year or so. It has now reopened with a café, small meals and ice creams. You can’t miss it, it’s the blue wooden building on stilts!

The owners of the Schleiperle have also opened a store, Lütt Arnis for all things nordic by nature at the main crossing, right next to the bakery, check here for opening hours and more information.