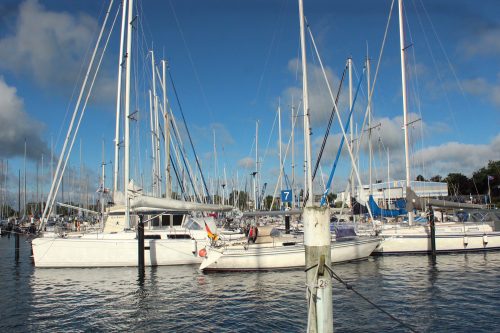 On the western side of the Kiel bay Strande is a nice, cosy spot suited to walks, beaching it and enjoying some fresh fish. It is only a walk away from Schilksee, the sailing hub for the 1972 Olympics, but offers much more peace and quiet.

Several marinas in the Kiel Bay tend to carry a bit of swell from all the ferries, container ships and other vessels heading to or coming from the city or the Kiel Canal, but being tucked in its own bay, Strande remains calm so you can get a night’s sleep without rocking and rolling about. Should you feel the need for some retail therapy you can take the bus into town. Strande has several boxes on the southern side, we prefer to find a spot in the old fishing harbour, to make the most of the atmosphere and be closest to the outer beach. 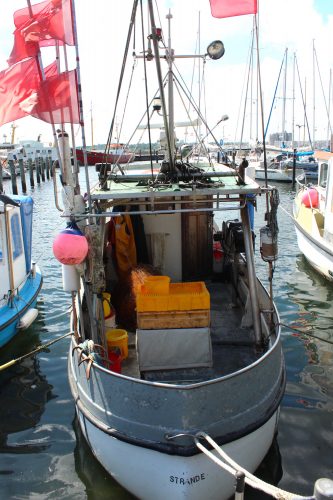 On a warm day, go for a swim at the beach. There is a small sheltered beach just behind the harbour wall, and a larger one stretching further toward the north. Between Strande and Schilksee is a third beach.  If you opt to tie up on that side of the marina it is much closer. Take you pick!

Go for a stroll or run along the path to the Bülk lighthouse. This is a lovely walk and you can continue even further around the coast if you wish. The lighthouse is open for visits, or just sit on the outer end of the bay and enjoy the view of the Baltic before you.

In the summer months you can jump on the ferry and go over to Laboe on the eastern side of the bay. It arrives and departs at the end of the pier three times a day weekdays and four on the weekends. Information and times here.

Alternatively catch the bus into the city center of Kiel. Bus No. 501/502 picks up and drops off just opposite the marina about every half an hour. The trip takes approximately 40 minutes. See the timetable here

Grab a snack at the fish stand right at the harbor. Anything from fish patties, crab meat, smoked salmon, or the northern Germany speciality matjes at the Kiosk Seidentoff. Or go for a meal at Alexy, Strandhotel, Bruno, or Das Kaiser. You won’t go hungry!

If you are lucky and are here while the annual Kiel Week is on, usually the last week in June, just make yourself comfortable on the beach or the pier and watch the thousands of sailors, including the world’s best, do their stuff. In some classes there are hundreds of boats, so there are masses of yachts to watch at times.